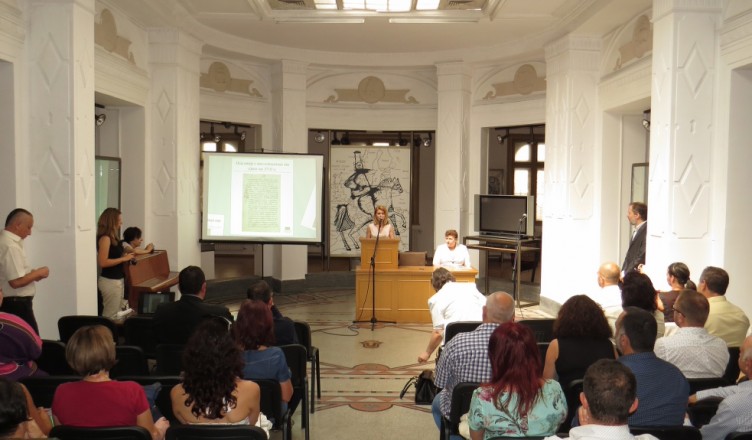 Within implementation of “Contemporary approaches to research, presentation and access to the literary heritage of Gabrovo Province“ project, on 07/11/2016 in Regional Historical Museum of Gabrovo was held final press conference, where the final result of the project was presented. The event was attended by the Mayor of Gabrovo Mrs. Tanya Hristova and the province governor Mr. Nikolay Sirakov.

Mrs. Krasimira Cholakova, director of the beneficiary pointed out that within the implementation of this project Regional History Museum of Gabrovo in partnership with the “Aprilov-Palauzov” Regional Library created two centres for digitization of the literary heritage of Gabrovo province. Virtual library with links to partner sites was build with a catalogue of objects and attached to them digital resources, with search ability and ability to display the exhibits over the Internet which will allow sharing written cultural and historical heritage over the global network. It was Implemented a maintenance of the funds of manuscripts and early printed books, then collections were moved to special archival cabinets. Personnel was trained with the necessary knowledge to conduct activities on digitization of objects of cultural value. As a result of inclusion of Roma population representatives in the project results promotion, Roma children were involved in the national culture with the aim of integration into the local community. According to the project manager Rosen Yosifov: “RHM – Gabrovo is the only beneficiary of the BG08 program, who created two centres for digitization. This will preserve the cultural heritage for future generations and will provide free and unlimited information access to the literary heritage of Bulgaria. Installed equipment allows for its efficient use in the long term, as the scope of digitized objects will be expanded to cover the collections of other cultural institutions.”.